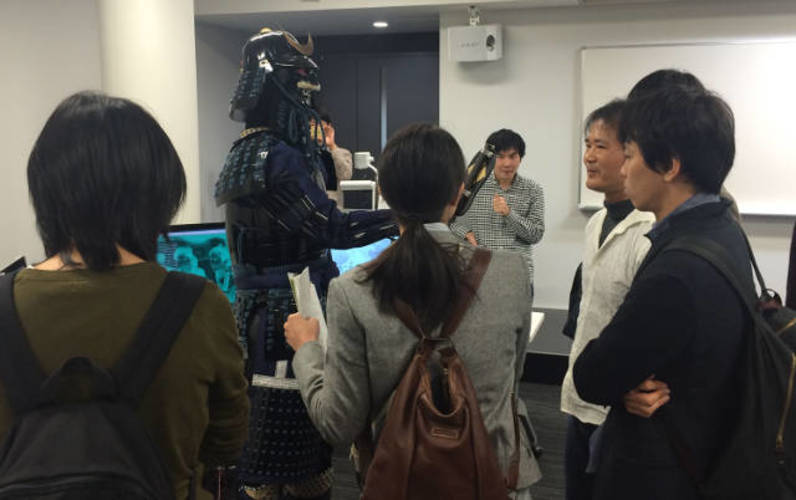 I’m not sure what’s up with Japan and them wanting to make robots that are like Samurai warriors, but hey Samurai are cool so we’re not complaining.

We’ve seen robo-Samurai before with Yaskawa Bushido Project and MOTOMAN-MH24, the Katana wielding slicing and dicing machine capable of competing with the great Isao Machii. While that robot was more or less a glorified hedge trimmer that can potentially put an end to mankind if it felt like it, the Samurai robot we’re looking at today carries a different type of Katana – the sword of communication.

Indeed, it seems like the purpose of this robot, called “AI-Samurai” is to make a physical AI robot that can achieve realistic conversations. That doesn’t only cover talking, but also other important factors of conversation like eye-contact and being able to converse back and forth.

The AI-Samurai is the creation of Nextremer, and they have 4 things they’re emphasizing with their project. The first of which is “How to define the interactions between human and ai.”

Human and robot interactions always have been a topic in science fiction with movies and books, but what is the clear path to getting perfect conversations between man and machine?

Nextremer believes that experience through trial and error may be the key to this, and they have decided to take AI-Samurai on an adventure – a world tour challenging itself with real conversations around the world.

As a Samurai (thankfully) without a sword, as stated on their website they are “seeking the ultimate answer for the harmonious coexistence.”

The second point is AI-Samurai’s robot vision. Unlike voice to voice only communication, the team has decided to give their robot camera vision in order to feed it visual feedback of the person it is talking with.

They believe that real time visual information will help it make observations during conversations. This could mean the robot can clearly recognize faces and can be capable of knowing bits of information such as name, age, gender, interests, and other things just as normal person would.

Dialog is the third point they emphasize, since often speaking to a robot is intimidating due to not knowing what information is stored in their hard dr-… er, robot brain.

Nextremer is aiming for AI-Samurai to be able to recognize and understand dialog and give expressions with feeling in them, in time optimizing its own speech to make communicating with you comfortable.

And the final point, the point that makes AI-Samurai truely unique: his Busho Diagnosis of the Sengoku era. AI-Samurai is a Samurai after all. Rather than not having topics to discuss or asking “How’s the weather?” AI-Samurai actually has character and makes him interesting.

He is equipped with a “Warlord Diagnosis” and can teach and quiz you about popular Warlords of historical Japan. He will also supposively teach you courage, and the way of the Samurai.

AI-Samurai’s world tour is to begin with next year’s SXSW (South By Southwest) Interactive, the interactive media conference in Austin, Texas – on March 11, 2016.

So far, the best look at AI-Samurai seems to be their promotional video which shows the making of and examples of AI-Samurai in action. The presentation is fairly impressive, it displays pretty smooth communication between the user and itself.